KAQG:  A BRIEF HISTORY
A group of students who had taken a quilting class given by Peggy Hicks organized as the "Quilting Bees" in the spring of 1977. Those present at the first meeting were: Marti Garrison, Peggy Harper, Peggy Hicks, Jeanette LaRose, Judie Montano, Patti Rogers, Jackie Runyan and Merijane Vladyka. The membership quickly grew to over twenty.The Guild participated in the Kingwood Art Show in the summer of 1977 and held its first bazaar that same fall in front of Top Stitch in the Kingwood Shopping Center.One of the group's early projects was the Kingwood Quilt. The idea of a quilt, as a celebration of Kingwood, was conceived in February, 1978. The quilt was designed by Merijane Vladyka.  Twenty-four members, many beginning quilters at the time, worked on the blocks. The quilt was raffled, raising over $1,800.00 which was donated to KAEMSA.  It was won by Ann Davis of Crosby.  Exxon eventually bought the quilt from the Davises and gave it - as a corporate Christmas gift - to the King Ranch, their co-developer of Kingwood.During the time of work on the quilt, the name of the organization was changed to Kingwood Quilt Guild.  In 1983, with members coming from a wider geographical area, the name became the Kingwood Area Quilt Guild.The Guild has grown to a membership of approximately 200.

PAST PRESIDENTS
TRAILBLAZER AWARD
“In Pioneer America the Trailblazer was the one who scouted new terrain, assessed its possibilities, and left his mark as a path for others to follow.''  (Kay Hudec, 1983)
The Trailblazer Award was instituted in February, 1984; for outstanding leadership and service to the Guild and the art of quilting. The award is given at the discretion of the Board and nominations from the membership may be presented to the Board for consideration. The award is not necessarily an annual award but is appropriately given as our highest award.
SILVER THIMBLE AWARD
The Silver Thimble Award is given annually to an individual or individuals within the Kingwood Area Quilt Guild in recognition of their exceptional efforts to promote the art of quilting through outstanding dedication to the skills, knowledge, and personal involvement in guild activities. The recipients are chosen by a vote of the general guild membership.
GOLDEN NEEDLER AWARD
The Golden Needler Award, initiated in 1983, is given to a Kingwood Area Quilt Guild member's spouse who has distinguished himself for his excellent taste, superior judgment, discriminating faculties, and long-standing support of quilting activities.
HALL OF FAME AWARD
This new award was created in 1999 to recognize members who have already won a Silver Thimble and have continued to offer the Guild years of outstanding service.  There can only be two given in any one year; however, the award does not have to be given every year.
LASTING LEGACY AWARD
This award was created in 2009 and is given annually to a member or members of the Kingwood Area Quilt Guild in recognition of their exceptional efforts to further the art of quilting through extensive years of dedication to the art; sharing their skills, knowledge and quilts for future generations.  Their quilts will be a lasting legacy to the art of quilting.

Very early in the Guild's history, 1978, it was decided to make a quilt to raise money for KAEMSA, our late, ambulance service. The quilt was designed by Merijane Vladyka. The blocks were of differing sizes and showed many aspects of life in Kingwood at the time. It also represented much of the wildlife that shares this wooded area with us. Kingwood lake was featured as was the ambulance service, tennis, golf, boating, cycling and our chruch

es. Members took blocks and finished them in record time with little quilting experience. This was the first guild wide quilt made and it was a beautiful quilt. The last known residence of the quilt was the King Ranch
. 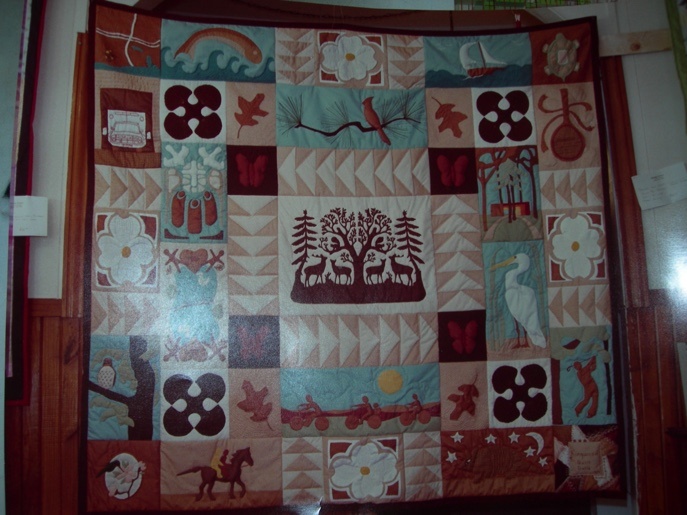 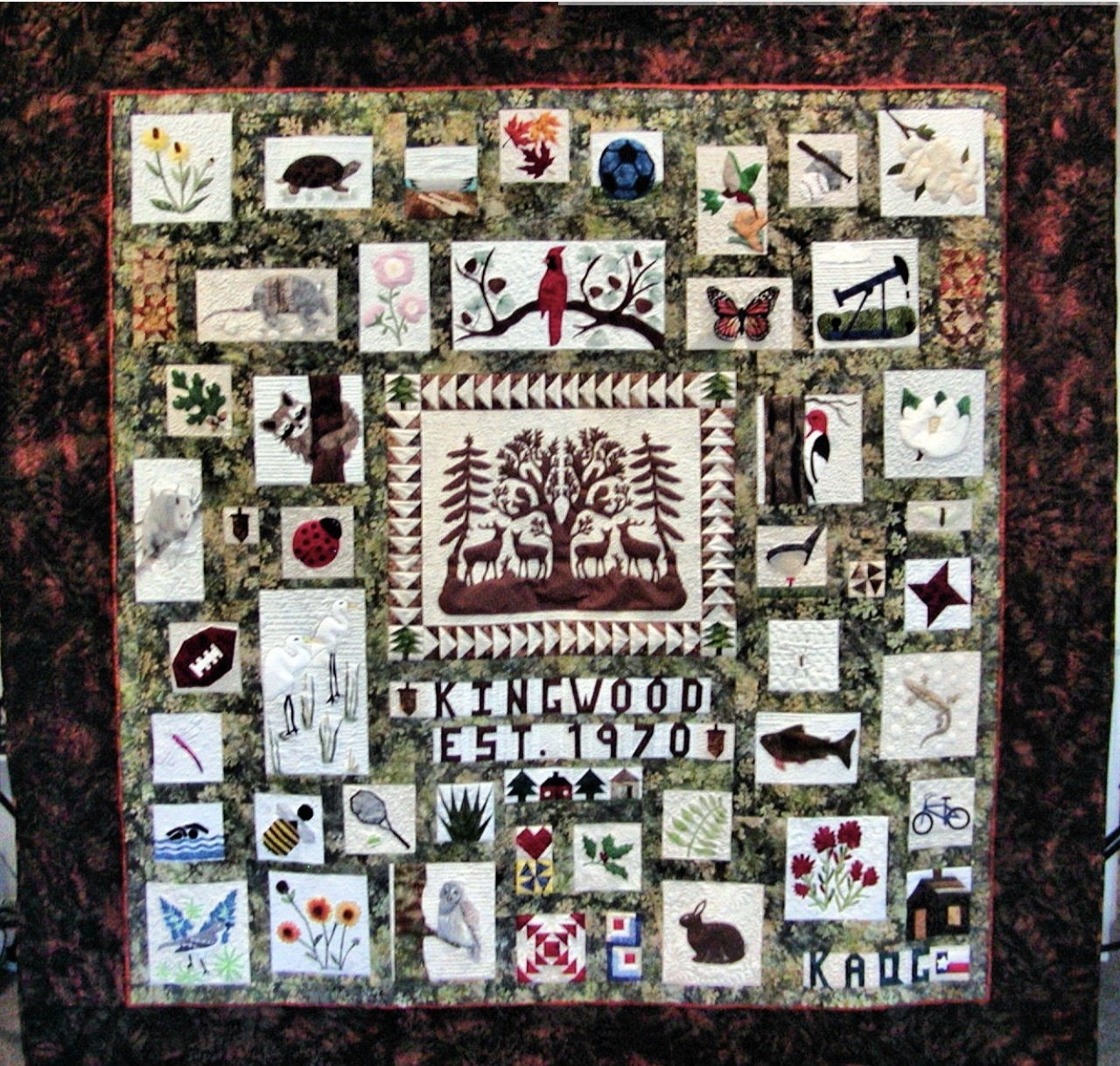 Our new library quilt "ALL ABOUT KINGWOOD" is now hanging on the second floor of the new library. Many hands worked to make pieces, sashings, and assemble this quilt which was then quilted by Margo Pieper. Be sure to check it out on your next visit!! 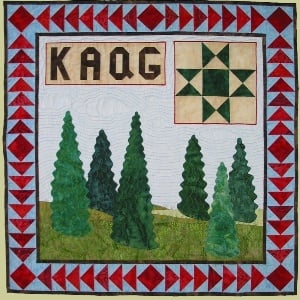 To celebrate the 30th anniversary of Kingwood Area Quilt Guild, a contest was held in the spring of 2007 to select a new banner.  The members chose a design by Janet Turini that incorporated many of the elements from the previous banner designed by Judy Curtis.  Batik fabric was used to give the banner a bright updated look while maintaining the Ohio Star block, the guild initials.  Appliquéd trees in a field of green with blue sky, in the center represent the Kingwood Area.  Borders of red flying geese against a light blue background complete the banner.  The piece was machine pieced, machine appliquéd and machine quilted by Janet Turini.

2005 Winners Link
2007
The Humble Civic Center was again the site of KAQG’s twelfth biennial Quilt Show “Follow Your Own Star” held on April 13 and 14.  Close to 1,200 people attended the show. This was a special time for us since this year we celebrated the Guild’s 30th Anniversary. As always this show was our way of showcasing the tremendous talent that our members possess. We had close to 200 quilts entered in the show of which 102 of those quilts were submitted for judging.
Our quilt show judge was Liz Axford, an artist and quilt maker from Houston. In the past, Liz has judged the 1999 and 2003 IQA quilt shows and 2005 Celebrate Spring quilt show among others. We had our enormously popular Out of this World Boutique, the Shooting Stars Silent Auction for mini quilts, grab bags from our Star Fish Pond and, new this year, the Galaxy Booth where visitors could learn about quilting.
We also had a Trip around the World exhibit displaying blocks from, where else, around the world. The theme of our Special Exhibit area was Mommy and Me or Grandma and Me quilts and also featured Holding on to Memories Scrapbook quilts.
Our donation quilt “Stars in my Garden” was inspired by Judy Martin’s original design found in her book “Judy Martin’s Stars and Sets”. Judy granted permission to the Guild for the use of the pattern. The quilt was won by Karen Mosier of Kingwood, Texas.
Our wonderful members volunteered their time to ensure that our show would be a great success. The show was co-chaired by Edy Etter, Lish Croes, Janet Turini and Nancy Wakefield.

2007 Winners Link
2009
The 13th biennial was held at the Humble Civic Center on May 1 and 2.  The quilt show was "Peacemakers of the Heart".  We had a judged show with over 300 quilts.  The special exhibit was quilts that touched someone heart.  Vicki Pignatelli quilt for her husband was displayed.  The quilts really touched the hearts of the attendees.  Every emotion was displayed in these wonderful works of art.
We had over 24 vendors, silent auction, fabulous boutique, and the Sweetheart Cafe.  It was a great time and we had over 1200 attend the show.  The Best of Show was awarded to Noreen Borys for her Rose Window.  The donation quilt was "Over the Rainbow".  We had three directors for this event.  They were Fonda Smallwood, Margaret Errickson and Lish Croes
2013
The 14th show was held at the Humble Civic Center on April 19 and 20th.  The theme was "The Quilted Forest".  The donation quilt is pictured

here and the show winners are listed